Like the wide-open expanses of his Montana home, Chris finds inspiration in all directions.  “I can never predict where a song will come from or what I’ll write about… the one constant for me seems to be a sense of revelation and hope, even after a period of struggle or reflection.”

Chris is perhaps best known for being one half of the critically acclaimed acoustic folk-pop duo Storyhill (signed to Red House Record Label) whose career spans 25 years, 15 albums, national tours and appearances at major folk festivals and premier venues such as, Mountain Stage, and Garrison Keiller’s A Prairie Home Companion and the APHC Cruises (2015 and 2012).

With the duo currently on an open-ended hiatus Chris has turned his attention to producing for other singer/songwriters, voice talents and bands at his studio Basecamp Recording.

Chris performs solo regularly and with other top-notch players including Tom Murphy, Mike Parsons, and Russell Smith who all formed around Chris for his episode of the Emmy award winning “11th & Grant with Eric Funk”, produced by Montana PBS in 2017. 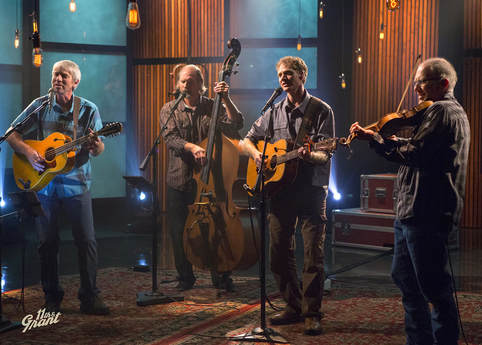 ​
​Due to the success of the episode, it’s continual airings and the overwhelming positive feedback Chris has decided to remix the performance into CD format.

“I felt deeply honored to receive the invitation to play on this critically acclaimed show that has aired for thirteen seasons - and I jumped at the opportunity to put together a backup band of some of my favorite local bluegrass players. My hope was to do a performance with a broad mix of my original songs in a fun, refreshing way … that I call “folk-grass.”

The result is a live CD capturing the energy of the band, showcasing the players’ phenomenal talents while allowing the meaning of the lyrics to clearly shine through. It’s the ideal balance of a light-hearted, toe-tapping album paired with sincere and substantial themes that resonates with listeners. This album captures the spirit of where Chris calls home, the Rocky Mountains of Southwest Montana.

​Chris Cunningham Live on "11th & Grant" was successfully funded on Kickstarter. CDs will ship early September 2018. Once released, the album will be available on Bandcamp, CDBaby and iTunes.